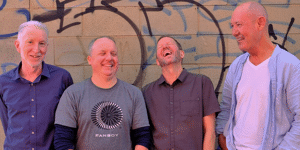 Be Brave had a significant following in Adelaide from 1989 to 95, were played on high rotation on JJJ for three of their singles (Attacks of Madness, Bring the Rifle and Churn) far before any other local SA act. Their three releases were supported through Mushroom Export nationally, and they toured extensively with bands such as Hunters and Collectors, Ed Kuepper and Boom Crash Opera, here and throughout the east coast. They were at the heart of the vibrant early 90s Rundle/Hindley Street scene playing regularly at the Austral, Exeter, Boltz, Club Foote, Limbo etc and also performed three times with JJJ’s ‘Live at the Wireless’ (one at the Lion Theatre bar to over 500 local punters, one at the Adelaide ABC and one in JJJ studio Melbourne). Three of the four original members (Chris Brandwood, Dave Rostron and Josh Roach) will perform both released and unreleased songs, while Damian Murphy will stand in for original drummer John Hastings.  The gig will have a unique flavour as, not only will Be Brave perform for the first time in 25 years, but also front man Chris Brandwood’s son Ethan heads up the support act The Gullies.    Come and enjoy this vibrant evening of 90s guitar band reminiscence, combined with a high energy ‘next gen’ original act. For more info head to bebrave.band

QR Code Check-in Reduced capacity for social distancing  Sanitiser will be supplied, wash your hands Masks to be worn indoors unless consuming food or beverages  Seated consumption, with no singing or dancing for audience members